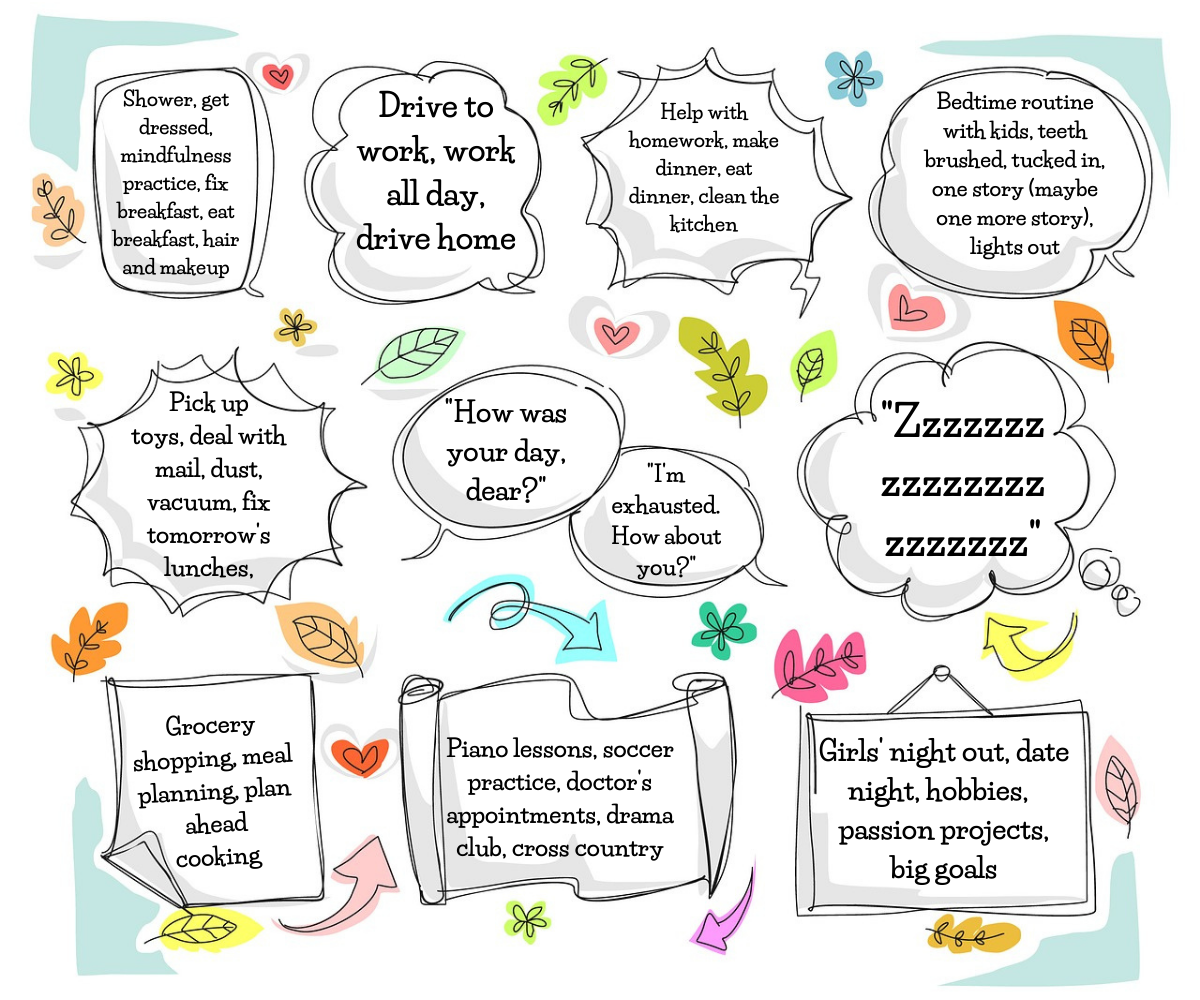 No Comments on How to get things done when you’re overwhelmedPosted in Mindfulness, Productivity By Kriss JuddPosted on September 12, 2021September 16, 2021

As working moms, we’re expected by society to do, be, and have it all together, all the time. There’s no room for dropping any of the balls we juggle: kids, spouses, parents, jobs, businesses, home, all of it has to be perfect all the time. Right? Wrong.

“If you saw Atlas, the giant who holds the world on his shoulders, if you saw that he stood, blood running down his chest, his knees buckling, his arms trembling but still trying to hold the world aloft with the last of his strength, and the greater his effort the heavier the world bore down upon his shoulders – What would you tell him?”

I…don’t know. What…could he do? What would you tell him?”

(Before you email me, yes, I know Atlas is holding the heavens on his shoulders. But the quote’s still apt.)

Here’s another quote for you, from Madeleine Albright “I do think women can have it all, but not all at the same time. Our life comes in segments, and we have to understand that we can have it all if we’re not trying to do it all at once.”

There are times I think “doing it all at once” is the very definition of motherhood. We have to take care of the kids, run the house, support our partners, please our bosses, show up for our friends, and look gorgeous, all at the same time. It’s overwhelming, what we expect of each other, what we expect of ourselves.

Why you can't (and shouldn't try to) do it all

First of all, there are only so many hours in the day. If you spend two hours getting everybody ready to leave the house in the morning, half an hour on the commute to work, nine hours at work, another 30 minutes to drive home, two hours helping the kids with homework while you make dinner, half an hour eating dinner, an hour playing with the kids, half an hour on bedtime routines, two hours cleaning the house, an hour with your partner, and eight hours asleep, you’ve already hit 27 hours.

And that’s if nothing else is going on. No grocery shopping. No extracurriculars for the kids. No time with your friends. No crises crop up. Nothing unexpected happens. Nobody gets sick or has an accident or needs to see a doctor. Nothing in the house breaks. Your boss doesn’t ask you to work overtime on an important project. No possible way to squeeze everything into a 24 hour day. Something’s gotta give, before something breaks.

What to do to avoid overwhelm

There are any number of ways to flex things. But first, you need to do a brain dump. Write down everything you have to do in a normal, same old, same old kind of day. From the time your eyes snap open in the morning til the time you pass out at night. Don’t include any of the extras like grocery shopping or stopping by the bank. No outside appointments. Nothing but home and work.

Next, write down everything else you have to do in any given week. This is where the kids’ soccer practice and piano lessons, your weekly trip to the Super Walmart, date night, and girls’ night out will go.

Finally, write down everything else you have to do on a monthly or longer basis. Doctor’s appointments, oil changes, yardwork, the school bake sale, balancing your checkbook, anything that has to happen less often than once a week.

You’re going to feel overwhelmed when you do this. That’s okay. Because we’re going to get you out of that feeling.

Kids can get their own breakfast once they’re old enough to pour a bowl of cereal and milk, or grab a granola bar and a Go-Gurt. They could microwave frozen waffles or get a bowl of fruit out of the fridge. You don’t have to do any of those things for them.

You personally have to eat dinner with your kids. You do not personally have to make dinner. Older kids or your partner can cook. You can order takeout or delivery. You can hire a private home cook who sells homemade dinner to people like you, complete with reheating instructions.

What’s more important, finishing the Jacobsen account or taking your sick kid to the doctor’s office? Obviously, taking care of your sick kid wins that comparison. Figuring out what’s most and least important can be as simple as ABC.

To do a paired comparison, write down your list. So if I want to shave the cat, write a book, mop the walls, and make a cake, I list them with letters in front. Like this:

A Shave the cat

B Write a book

Then I start comparing. Between shaving the cat and writing a book, which needs to be done first? Well, the cat’s fur is full of chewing gum and brambles, so I probably oughta shave him before I write a book. So I write A next to Shave the cat. Same goes with mopping the walls and making a cake; they have less urgency and importance than shaving the cat. So two more As go next to Shave the cat.

A Shave the cat AAA

B Write a book BD

A Shave the cat

B Write a book

There’s your order for pursuing tasks. Shave the cat first, then make a cake, followed by writing a book, and ending with mopping the walls.

Break it down more

Now that you have your prioritized task list, it’s time to get nitty with the gritty. What tasks do you absolutely have to do every day? Which ones could move to every other day, or 2-3 times a week? Which could be done weekly or monthly? And what tasks do you really not have to do at all?

For example, maybe your morning mindfulness practice includes journaling, meditation, and yoga. Could you do the yoga part every other day? Or three times a week? Or say you’re cleaning the kitchen after dinner; do you have to scrub down the hood vent every day? Or could it be done weekly or monthly instead? (Or could you not have to personally clean the kitchen at all?)

Once you finalize your task list, to reduce overwhelm even more, break your tasks down into smaller, bite-sized chunks. For example, when you clean the kitchen, you rinse dishes, put them in the dishwasher, wipe down countertops, wipe down the stove top, shine your sink, sweep, and mop the floor. As you do these smaller tasks, you’ll find more satisfaction in crossing them off your to-do list for the day.

To help get out of the overwhelm with procrastination, schedule your daily tasks in your calendar. To keep going with the kitchen example, you could schedule rinsing the dishes for  6:30, putting dishes in the dishwasher at 6:45, wiping down countertops at 7, wiping down the stove top at 7:10, shining your sink at 7:20, sweeping at 7:30, and mopping at 7:45.

Make sure you schedule in the bigger, more important tasks first, like work, spending time with kids, and spending time with your partner. Most importantly, schedule time with yourself, to make sure you’re not getting burned out or  overwhelmed by day-to-day life. Including a mindfulness practice every day. It doesn’t have to be anything fancy schmancy, but it does have to be on your calendar to eliminate analysis paralysis. If tasks are on your calendar, you don’t have to decide what to do and when to do it, because you’ve already made those decisions.

It’s okay to multitask on some things, like cooking dinner and helping with homework, or cleaning the kitchen while you listen to a  podcast, but don’t try to do too much at the same time. Countless Studies have shown that people suck at multitasking. All of us do. Every last one. That includes you.

Be mindful of your time

To be mindful of your time, set alerts on your calendar that warn you five or ten minutes before it’s time to switch tasks. If you find that tasks are taking longer than you scheduled them for, adjust your schedule. Using your calendar in this way will help you stay focused on the task at hand, knowing that you’ll get an alarm when it’s time to do the next thing.

Be mindful of your energy

Being mindful of your energy will help you schedule tasks more efficiently. For example, if you’re a morning person, you could work on tasks that require more energy first thing in the morning, rather than leave them till the evening. If you’re a night owl, the reverse is true.

After spending most of my life as a night owl, I’ve become a morning person, typically waking up between 3 and 5 every morning. I started writing this blog post at 4:30 this morning. I had planned to write it yesterday, but the day got away from me, and I didn’t have time to sit down and write until about 8 last night. I knew if I started then, I just have to rewrite the entire thing today. So I waited.

Be mindful of your money

Be mindful with your money. Spend where it makes sense to spend. For example, you could hire a housekeeper to come in once a week and clean your house from top to bottom for oh, let’s say, $100.

Or you could spend that $100 on paying your kids to do household chores, either per job or as a weekly allowance, then have money left over to pay someone to cook those premade homemade meals for you so you don’t have to cook as much.

You could hire a nearby college student for absolutely no money at all, to do your laundry or babysit your kids in exchange for letting them do their laundry once yours is done.

Stop trying to do it all

This framework will help you reprioritize your task list, to make it work most efficiently for you. With practice, you’ll be able to categorize your tasks more quickly, and help you be more mindful of your time, energy, and money.

Further reading: How to stay productive even when you’re depressed; 7 ways to move from overwhelmed to overjoyed; How to cope when you can’t cope

Follow us
How to get things done when you’re overwhelmed