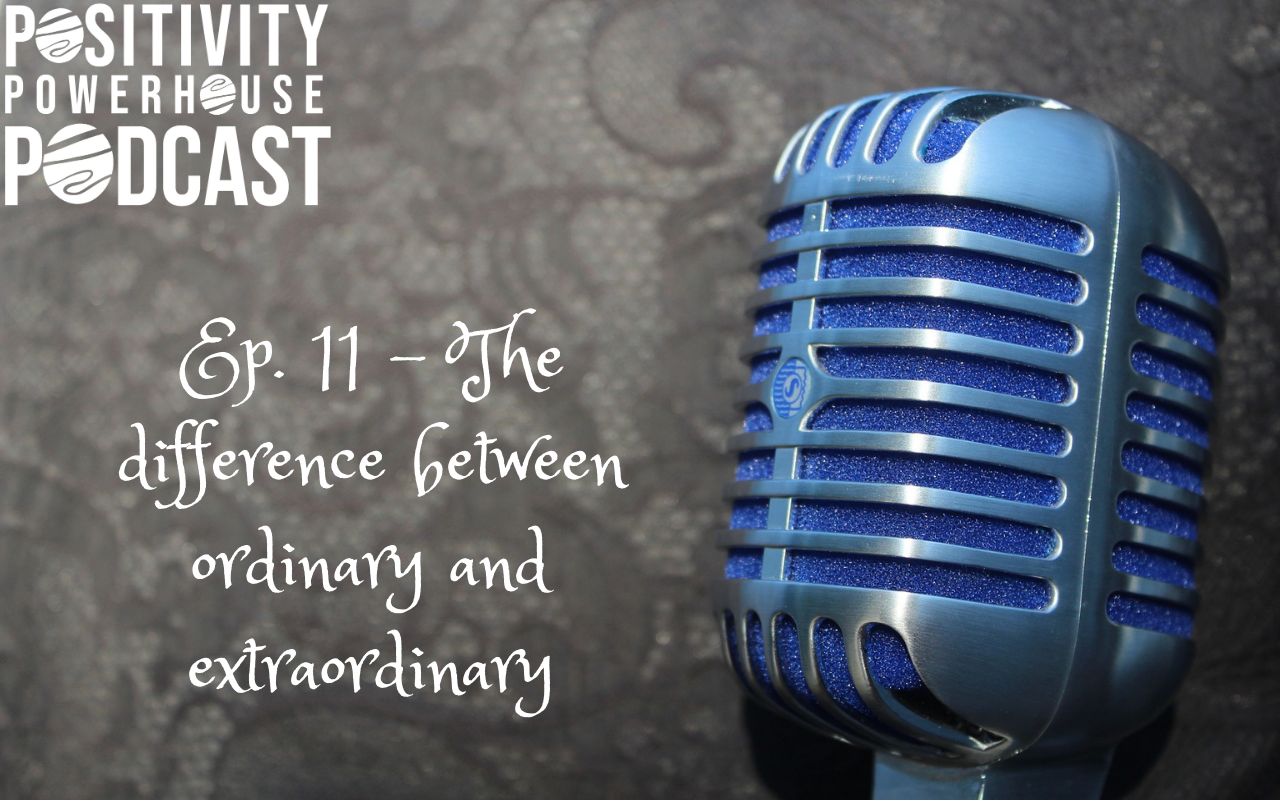 Welcome back to the Positivity Powerhouse Podcast!

Want to watch the podcast?

Want to listen to the podcast?
Want to subscribe?

Want to read the transcript?

In this episode, we’re gonna talk about how the difference between ordinary and extraordinary is that little extra.

Hey! Welcome back to another episode of the Positivity Powerhouse Podcast. I’m Kriss, and I’ll be your positivity powerhouse today, tomorrow, whenever. But it’s gonna be me ‘cause you’re stuck with me.

Today’s message from the wall is: “the difference between ordinary and extraordinary is that little extra.”

And, if you’ve known me for more than about five years, you know that I grew up in a football town, in a football family. I was a football fan. I wanted to play football. When I couldn’t play football, I joined the marching band so I was at every game anyway for free. Got free food, got great seats, got to play the flute, and the piccolo, and it was AWESOME.

Except for, you know, those games where you had to scrape three feet of snow off the field with like, I don’t know, bulldozers or something. Whatever you use to move large amounts of snow off of a grassy field.

And, when I played the flute, condensation from my breath froze in the mouthpiece of my flute. So, I had to, like, go and run it under hot water in the bathroom before halftime so I could still be able to play.

Well, maybe not the rainy ones or the ones where it was sleeting. Always fun to play when it’s sleeting, you know. To be outdoors in a band uniform and a jacket and playing the flute with sleet blowing in your face.

So, maybe the marching band isn’t so much fun.

FOOTBALL would’ve been great, though. Would have LOVED THAT because you’re on the field, and you’re beating up on people, and it’s LEGAL.

Sometimes you need that angst relief when you’re a teenager. You just really need to beat up on something, and it’s either going to be yourself or that kid from the other school that you’re never gonna see again and who you really don’t care about.

But, I grew up a football fan.

So, if you’ve been a football fan, like ever, you probably know who Jimmy Johnson is before I even have to tell you who he is.

Jimmy Johnson is a former pro-football coach, he’s an NFL commentator, and he’s an inductee in the NFL Hall of Fame. He is a big freakin’ football deal.

He is THE MAN.

And he said that the difference between ordinary and extraordinary is that little extra because if you don’t see the words written down, you don’t realize that extraordinary has that ‘a’ in there to make it extra-ordinary.

Just in case you had never seen it written down.

Lots and lots of people hated the movie.

It was just a bad movie.

But, there was this one scene called “The Death Crawl Scene.” You can find it on YouTube, just search for “death crawl facing the giants YouTube” and you will find this scene.

And the coach is, you know, chewing out this kid, who’s this quarterback, you’re supposed to be the leader of this team. Team captain, you know, whoever the heck he is, and wants him to do a death crawl with his buddy on his back.

He’s just kind of, you know, hanging out there on your back to add this extra weight.

And then the coach puts a blindfold on him, ‘cause he says, “Look, you don’t need to know how far you’ve gone. I’ll tell you when you’ve gone far enough.”

And, the guy’s like, “Well, I can’t do more than about twenty yards” or thirty yards, or whatever it is he says.

So, he gets down, and he gets his buddy on his back, coach blindfolds him so he can’t see how far he is going, and then he starts going.

And he keeps going.

And he had started in the opposite end zone.

Now, if you’re not a football person, you may not know this, but from end zone to end zone, it’s 100 yards, and that’s really freakin’ far to crawl on your hands and feet, no knees, with your buddy on your back.

I mean, it’s far to crawl on your hands and feet anyway, without your buddy on your back, but with your 140 pound friend on your back, REALLY BIG DEAL.

So it was just that little extra of the blindfold and the coach encouraging him that meant he made it more than twice as far as he thought he was going to be able to do in the first place.

So, there’s a lesson there: just stick your head down and do what you’re doing and you’ll get there.

Don’t stop when you think you can’t do anymore.

I’ve got vision boards up on the walls here above my desk, and there’s one right there that says, “Stop at nothing except bedtime.”

And I take that very literally. I start working when I wake up and I don’t stop until I go to bed.

So, how does this triple- How does this impact Triple M’s of Mood, Mindset, and Motivation? Three M’s.

It makes me feel eager to go and do it, to go and put in that little extra.

It’s from- I wanna say it’s from the musical Camelot, but I won’t swear to that. It could be a Monty Python thing, maybe. One or the other. I’m not sure which.

You know, if I forget that I can only walk five feet without falling over, maybe this time I can walk six.

Maybe with a physical therapist behind me holding on to a gait belt and a walker in front of me that I can cling on to, maybe I can even make it fifteen instead of just five.

‘Cause I’ve done that.

How amazing is that?

Well, most everybody can walk, but I am one of the ones that, like, can’t, so it’s a big deal for me to be able to walk, you know, more than five feet at a time.

You can’t see where my hands are out here, but they’re out there at the ends of my arms. Way out there.

I want to be an… oh, I don’t know, an auto-zealot? Is that what one would call a zealot for one’s self? I don’t know.

Motivation! See, this is where it gets a little interesting for me.

But one thing that they talked about was that, you know, you should go the extra mile for your customer. You should take that extra step. There’s no traffic jams on the extra mile.

It’s just what you do.

You take care of what’s important to you.

YOU are the most important person IN YOUR LIFE.

Here’s the hint: YOUR LIFE.

You are the most important in YOUR LIFE.

So that’s who you have to take care of. That’s who’s important to you.

It’s you. You are important to you.

So, you should believe in the extra mile for yourself.

You want to be bold.

You want to be audacious.

And you wanna win the day.

By going that little extra to be extraordinary.

Catch you next time!

Want more great content? Head on over to PositivityPowerhouse.com for four main reasons (you know me and my lists):

First, you’ll find more episodes of the Positivity Powerhouse Podcast just waiting for you to devour, either with video, audio, or the transcript, depending on your preferences.

Second, you can read the blog. I spend a lot of time writing these great blog posts and the hemming and hawing over whether anybody’s ever reading them. So, go read them! OK?

Third, you can find out all the great ways you can work with me as your mindset and motivation coach.

And, fourth, you can join the email list, where you’ll find out all the newest details about the first three options on the list.

So, what are you waiting for? Turn me off already! Go hit up PositivityPowerhouse.com

See ya next time!

<== Previous episode, The best way to predict your future is to create it 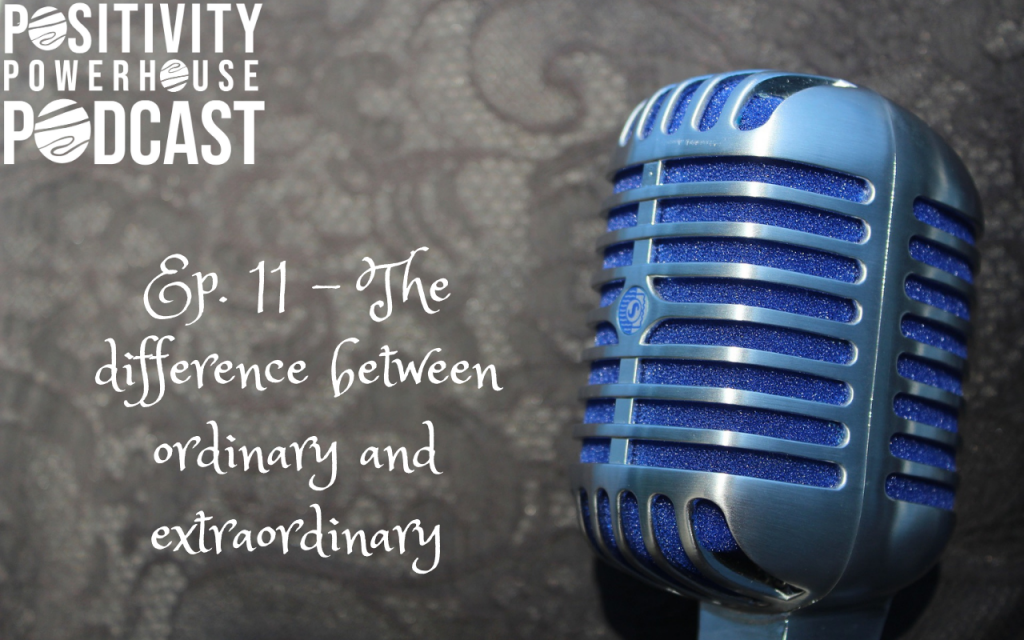