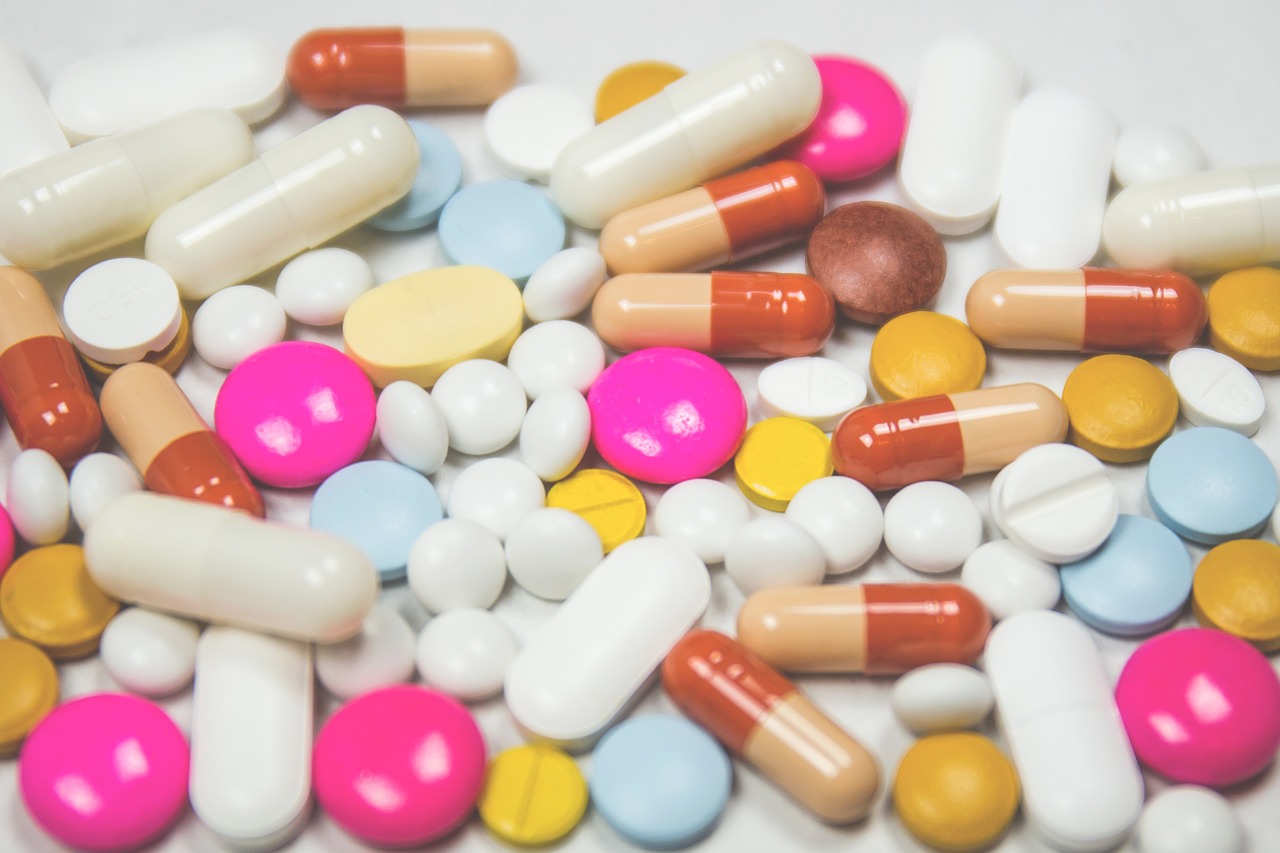 2 Comments on On positivity and self-carePosted in Positivity, Self-Care By Kriss JuddPosted on October 13, 2017July 8, 2021

Hi there, I’m Kriss, and I’m the Mindful Productivity Coach. A little about me so you know where I’m coming from: I have Panic Disorder with Agoraphobia, Social Phobia, Obsessive-Compulsive Disorder, and Bipolar Disorder – Not Otherwise Specified (because I have symptoms of several of the Bipolar disorders, but don’t fit entirely into any one of them). I’ve been in and out of therapy for more than 25 years, on and off meds for more than 20. My current meds include two mood stabilizers, two anxiolytics, and a benzodiazepine. (Plus another three dozen – no kidding – for a variety of physical medical conditions.) 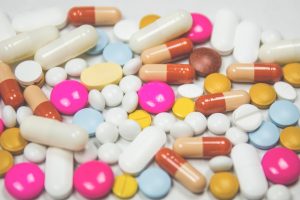 This isn’t enough pills to be all my pills.

I’ve struggled a lot over the years with many of the same issues you’re having. Miserable self-esteem. Negativity and cynicism. Surviving depression and abuse. Triggers. Panic attacks. Feeling unsafe. Pathological perfectionism. Overthinking and overanalyzing everything. Terrified of making a mistake, never mind actually failing. But I’m a lot better now – otherwise, I wouldn’t be the Mindful Productivity Coach! Here are some of the things that have helped me.

My therapist strongly, maybe even emphatically, suggested a new coping mechanism for me, just a few months ago. She recommended I undertake a creative hobby with a tangible output, something to concentrate on to occupy my mind. The underlying theory here is that if I focus on this I can’t obsess about that. She suggested Pinterest as a starting place for ideas. I spent probably five or six hours that day on Pinterest, looking for anything that looked both doable and cheap. A few days later, I visited family and asked my mother for ideas, since she’s one of the most creative people I know.

Mama taught me how to do English paper piecing so I can make quilts, pillows, purses, all manner of fabric crafts. It’s my new obsession; I love it. I’m working with hexagons – or hexies – since they’re so versatile. I probably have a good several thousand sewn so far. The first project I’m going to finish is a pillow for my daughter. 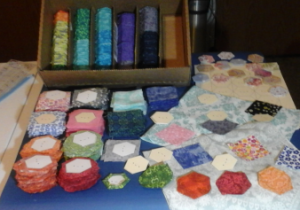 I have twice this many now, including hexies for two quilts and a large pillow.

You’d think my perfectionism would rear its ugly head with arts and crafts, and it tries to now and again. However, I can fight it back a couple different ways. First, perfect is boring. I don’t want my projects to be boring. My paper flowers are fun and whimsical. My initial letter banners are colorful and well thought out. My hexies are as good as they need to be. Which would you rather own, one of a million perfect, mass-produced bed-in-a-bag quilts, or one that was hand-crafted but may have a few quirks?

Second is a phrase I came up with when I was writing an article on how to make the hexies: Imperfection is inflection. Each of us is imperfect in our own way; that’s what makes us unique and gives us our own voice. One of my biggest challenges with the hexies, for example, is that I can’t count to two. Seriously. I want to do two stitches in several places, and I put four, or three, because I can’t remember if I’ve only done one or not. That’s just one minor thing that makes my hexies unique. 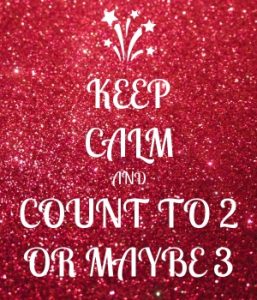 I got college credit for scoring high on the AP Calculus exam in high school. Unfortunately, we didn’t count to two in calculus…

Another means of helping me deal with my demons is 7 Cups of Tea (affiliate link – but I don’t earn money. I get, well, “points” when you click on it. They don’t add up to anything monetary either. It’s like Whose Line Is It Anyway? – the points don’t matter..) 7 Cups “is an on-demand emotional health and well-being service. Our bridging technology anonymously & securely connects real people to real listeners in one-on-one chat.” It’s a peer support network. The Listeners are trained sounding boards who can help you figure out how to deal with whatever’s going on. Listeners were members first; they understand where the members are coming from because they’ve been there.

If you don’t want to talk one-on-one, 7 Cups has other areas that can offer support. There’s your Growth Path, where you can do quick activities designed to lift your mood. Those are things like writing down two things you did well, or one small step to take today towards self-care. There are Group Chats for a variety of topics, including Anxiety, Depression, and LBGTQ+. There are Forums for more than 60 discussion areas, including Psychotherapy and Self Care. My personal favorite, especially for days when I just can’t interact with other people, are the Self-Help Guides, including Acceptance & Commitment Therapy (ACT), Panic Attacks, and Traumatic Experience. 7 Cups is where I found this video on ACT, which I watch probably at least once a week. 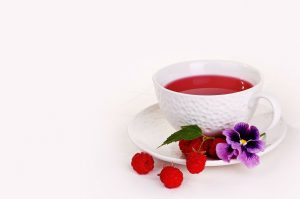 I don’t drink much tea, but this might be one of the cups I’d drink. I’m more likely to drink Buckeye tea, a sweet mix of instant iced tea, Tang, sugar, cinnamon, and nutmeg. Or Dr Pepper.

I found another coping method while working with a business mentor and several colleagues. We’ve been working through a book called Finding Your Direction, by Bill Cantrell (my smile.amazon.com supports The Mary Kay Foundation, which funds research to eradicate cancers that affect women, including the societal cancer of domestic violence). Bill uses a workbook when he’s teaching courses on the text. One thing it explores is the roots of our current behaviors – why we do what we do. I realized that a lot of my current behaviors and beliefs were based on what five-year-old me thought and believed.

Five-year-old me thought that if I knew everything, I could do anything. So I undertook to read the encyclopedia. The whole thing. Once I was done, I was certain I could do absolutely anything I would ever want to do, because I knew everything. Until my parents pointed out that there was a world of knowledge that didn’t exist in the encyclopedia. Since I couldn’t know everything, did that mean I couldn’t do anything? I decided that whatever it was I wanted to do, I would have to know everything there was to know about that subject before I could get ready to get started to get going. 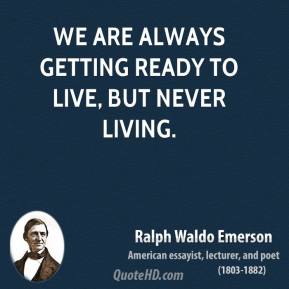 Ralph Waldo was a brilliant writer. Another of my favorites: When it is dark enough, you can see the stars.

That behavior  carried through to today. I research, analyze, and over think before I ever take the first step. But now, I ask myself a new question about doing it: why am I letting a five year old determine how I act today? Five year old me had no idea what I would be capable of doing today. (Granted, she could count to two…) She couldn’t possibly have conceived of the technology we have, the opportunities, the industries that didn’t exist back then. So why am I letting her run the show? Same goes with 11 year old me who decided that since getting all A’s and one B meant being grounded, she had evidence that she wasn’t good enough. While I have compassion for those scared little girls, I’m not letting them run the show any more. 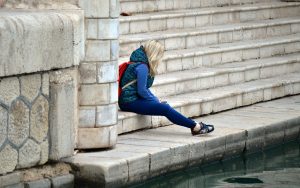 There weren’t any concrete stairs like this in my hometown, otherwise this could have been me.

My final coping method came from this article by Jon Morrow. He’s wheelchair-bound and can only move his eyes and lips. But he became a millionaire who’s traveled all over the country. After a car accident that left him pinned under his 300 lb. wheelchair with both legs completely shattered, he spent a month in the hospital. While he was there, he said to himself, “Okay, this is my life now. What’s next?”

I wrote that on a Post-It Note and stuck it to my monitor. You see, in addition to my psychological illnesses, I’m also physically disabled. Nobody knows why, but I can only walk a few feet unaided, before my legs give out. My arms, abs, well, all of my muscles are similarly affected. I have two dozen doctors and take about 45 medications for this and other health issues (including fibromyalgia, asthma, tachycardia, and GERD). Whenever I’m having a rough day health-wise, I can look at that Post-It, think of Jon Morrow, and soldier on. 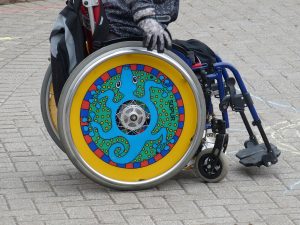 I want a rhinoceros on mine – rhinos charge towards their goals with no thought to what might stand in their way.

And now for my two trite truisms – with apologies for the alliteration and triteness both. First: if I can do it, anybody can do it. I’ve sucked at self-care and positivity for most of my life. And I mean really sucked. Not just a little sucking. I’m an overachiever. So if I can make strides like I’ve made recently, anybody can. (I actually complimented myself on something recently!)

And second: This, too, shall pass. I spent more than 20 years calling my Daddy to ask him to tell me that before my therapist asked me the obvious question, “Why not ask him to leave it in a voice mail for you?” Now when I’m awake and miserable at 3 a.m., I can hear him telling me, like he always has. Every time I play the message, I feel better. Why? Not just because it’s Daddy and he loves me, but because he’s been right every time. This, whatever it is, always passes.

What coping mechanisms do you use when your self-esteem and self-care aren’t where you want them to be? Let me know in the comments!

This post originally appeared on krissjudd.wordpress.com on March 15, 2017 and has been edited for publication here. It was originally an answer to a question about how to become better at positivity and self-care at Ask Metafilter.

2 thoughts on “On positivity and self-care”